Collaborative working between the Crofting Commission and HiE to Support Crofting

At last week’s Black Isle Show it was announced that the Crofting Commission and Highlands and Islands Enterprise (HiE) would have a closer working relationship in order to further support crofting in Scotland.  This follows a meeting between Rural Economy Secretary, Fergus Ewing, and the Crofting Commission in June, with subsequent discussions between leaders of both organisations.

An initial step will be for representatives of the Crofting Commission to attend the HiE Board meeting in October to discuss crofting issues.

During his visit to the Show, Mr. Ewing met with representatives from both organisations.  He said: “I welcome this positive development. Given their respective interests, it's only natural that the Crofting Commission and HiE should have a close working relationship, so it makes a great deal of sense to decide to formally work together in this way.

"This arrangement will undoubtedly lead to even closer collaboration between crofters, the wider crofting community, and the HiE who undertake extensive work in the Highlands and islands with the crofting community.”

"This Government is absolutely committed to crofting: a successful crofting sector helps our rural communities to thrive. It is therefore wholly appropriate for HIE's board and the Crofting Commission to establish an even closer working relationship."

Also welcoming the initiative, Crofting Commission Convener, Rod MacKenzie said: “We look forward to a closer working relationship with HiE which we view as a further positive step towards the continued strengthening and development of crofting in Scotland.  Both organisations have two very different roles but together can work to make a real difference to crofting and crofters.”

“Crofting is a way of life, a livelihood, and forms a connection to the community around you.  It is most certainly an asset to a modern-day Scotland, providing both economic and social value.  Crofting helps maintain rural communities and also encourages growth of small businesses through diversification which in turn generates income.”

Also speaking from the Black Isle Show, Carroll Buxton, HiE Director of Regional Development, said: "Crofting is an important feature of the rural environment in the Highlands and Islands. It is integral to many rural economies and communities. As such, it is very relevant to HIE's remit for both community and rural economic development.”

"We very much welcome the prospect of closer links with the Crofting Commission. Their expertise will be extremely valuable to our deliberations on matters that relate to crofting and crofting areas. In working more closely together, we can ensure our joint efforts are focused appropriately on areas of most value to crofting communities." 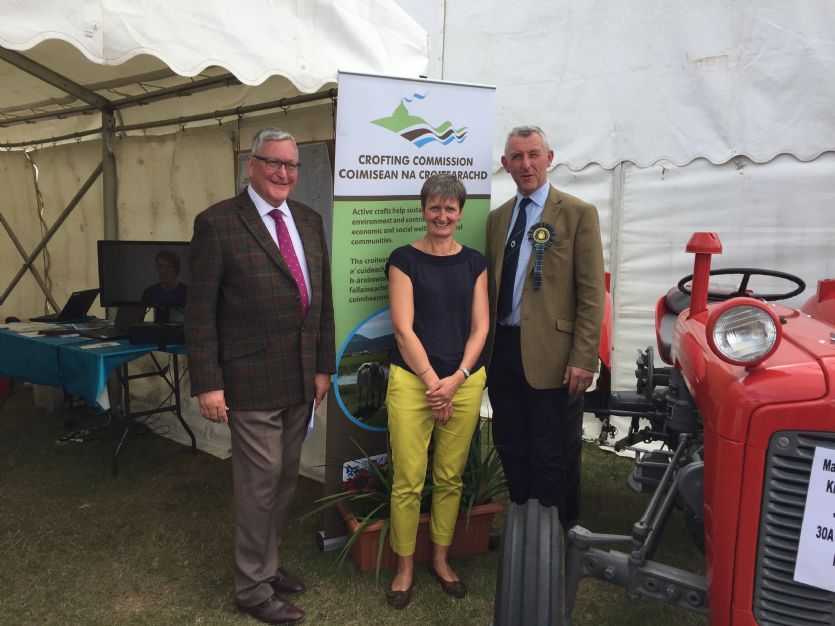 UPDATE: CORONAVIRUS
The Commission is now accepting new applications, but as all staff continue to work from home and the office remains closed, these will be processed more slowly than usual. Any applications that relate to statutory deadlines, or which concern a Crofting Register form to notify the Commission that an event has taken place, will be given priority over other applications.

Where applications require a site visit, it will not be possible for any site visit to be carried out until the government eases the current restrictions on movement.Where any application involves a hearing, no hearings will take place until the current restrictions on movement are eased and the government has advised that public meetings (with appropriate physical distancing) can take place.

If you are a crofter who has had an application approved by the Commission within the last 3 months
Please read this important information regarding effecting Commission regulatory decisions.

You can continue to contact us by email info@crofting.gov.scot and although we are now in a position to deal with phone calls to our reception line, few staff have access to work phones to make return calls and therefore the service will be limited. We would therefore ask that you continue to contact us via email. You can of course continue to use the mobile numbers on the Contact Us page of this website to speak with us.

The Commission understands that this is a difficult time for all concerned, but we wish to reassure crofters and their agents that we will continue to work to restore normal levels of service. It is unlikely that this can be fully restored until the government permits offices to reopen and for various restrictions on movements and meetings to be eased.
20 May 2020.

Contacting Us
Crofting
About Us

© Crofting Commission 2020Site MapSite by Plexus.
Cookies: We do not set cookies on your device unless you give us consent. Info